A project week in Denmark

Hi it’s Maija and Kata telling a story of our week in Denmark with the other participants.

Our week started on Tuesday the 26th of April when we took our flight to Copenhagen without even really knowing what we were supposed to do in Denmark..

We arrived to Copenhagen arround 12 o’clock and we had some spare time for shopping and stuff. In the evening we arrived to Humlebaek high school and met the other participants.

On Wednesday we had a better look on the other participants and tried to get to know each other with some different games and tasks. During the day we had a video workshop with our cordinator  Sampo and we were splitted to groups with participants from other countries. We learned how to make movies. In the evening we had a cultural evening where we ate some food from, Denmark, the Netherlands, Austria and Finland.

On Thursday we had some blog workshop with Stefan. We made some google maps and continued working with our films.

On Friday we packed our snacks, some bread, carrots and chocolate and took off to Copenhagen. We went on a boat tour through Copenhagen and then we had some spare time to shopping, AGAIN!!! 🙂 but we had a task to do, in groups: We had to interview somebody who was reflecting the multicultural side of Copenhagen and to take some pictures of the multicultural Copenhagen. After that we went to an exhibition and after that we walked to dine in a Turkish restaurant. It was a really long day for everybody.

On Saturday we had our last day together and worked with some posters. We made letters of our bodies. We finished our movies and posters and planned how to keep our project on the move. In the evening we had a goodbye party, where we watched our movies and ate food. Then we took part of the schools own party with everybody.

On Sunday the Finnish people had to leave quite early and we almost missed our train;D we had to drag our bags through a forest to the train station but we made it!

We are missing everybody very much and we can’t wait to September when hopefully everybody is comming to Finland! We had a really great week in Denmark and you all of the participants are forever in our hearts!♥

A lot of hugs and kisses from Finland, Maija & Kata

No Job For You

We can’t show you what took place in front of the camera yet, but see what happened behind the lens in the meantime! 🙂

The second Team of our “New Media Skills” -project has had the amazing opportunity to work with movie director Sampo Mansnerus from Helsinki, who will also be joining us to the International Workshop in Denmark. Since March 17th we have had weekly workshops with him, where we have learnt lots and lots about movies and how to make them. All of the participants were asked to come up with ideas for a short film that would address the topics of our project. There were many good suggestions, out of which we chose our favourite story for production. The original idea for the short film that we are working on came from Rudi, who has taken over the task of drawing the storyboard for our film. The whole team has participated in the planning of the script, which Sampo wrote out in a final version last weekend. Bertrand Gongne and Michalel Klade promised to act our leading roles, so we are now looking for shooting locations, props and trying to keep up with the tight schedule in all other ways, too! After a long search, the youth center Vuoltsu in Tampere kindly lent us the equipment for making our short movie. We will soon be ready to shoot!

Just look at our Film Project pages here for a summary of the things that we’ve discussed!

As a way of promoting intercultural understanding, we are inviting different cultural groups to present their food tradition at Kalevan lukio.

Selected restaurants, cultural associations and private persons are invited to display little samples of their respective specialties in connection to a parents’ evening on October 12th 2010 from 17.30-18.15. We are expecting around 200-250 guests.

All exhibitors will be provided with a table in the entrance hall to display food samples and drinks. They are also asked to

Our project will also have its own stand to inform about the project’s goals and to present our achievments. We will use a portable projector to show the videotaped interviews that we have made.

An invitation to the event will be sent to the parents of all first year students and other relevant guests. All the students of our school will of couse be welcomed to join as well!

Garba did a little visit to little Finland to arrange us a little workshop. We spent the whole monday together doing all these exercices about human rights and the themes around it. Plus we introduced Garba to your work and plans. Eventhough we seem to be a bit late with the work.. But our plan having a foodday rules ! Thanks for the visit Garba, c u soon again !

Working on the Blog 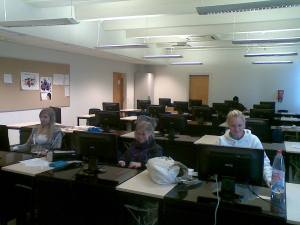